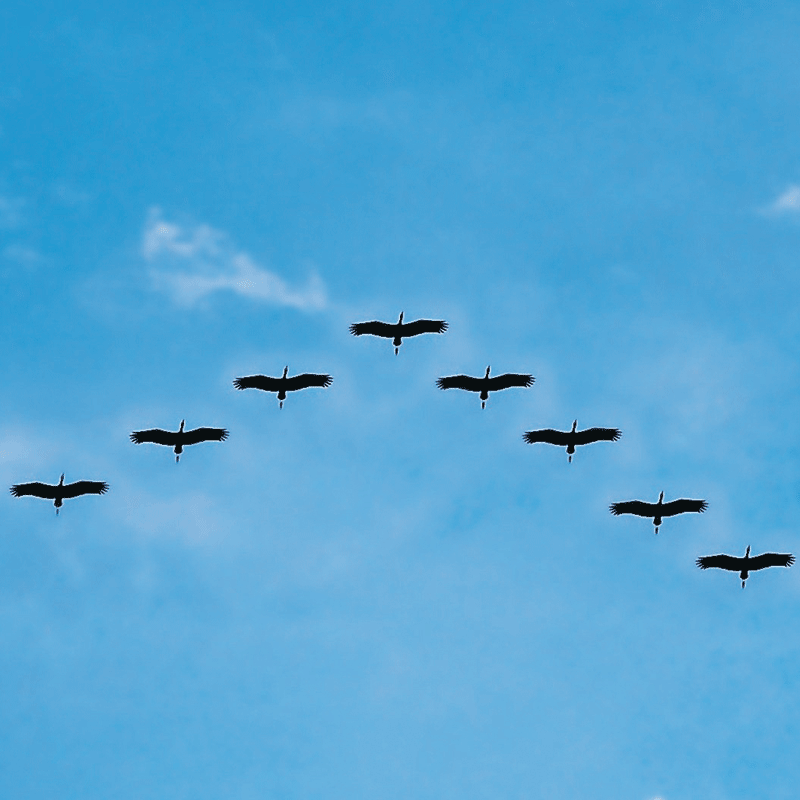 Honk! Honk! Whew, migrating sure is a lot of work!

I’m glad we only fly north in the spring and south in fall. We are Canada geese and, along with other long-winged birds like cranes, ibises, and ducks, we have figured out a way to make our long migrations a bit easier. We fly in a V-formation.

Now, this phenomenon kept puzzling the folks down there on the land. They believed that flying in a V somehow saved us energy – like fighter jets reducing fuel use while maintaining
a V formation – but we flap our wings!

To figure out this puzzle, researchers from the Royal Veterinary College at the University London strapped data recording devices to a flock of 14 endangered northern bald ibises. These birds followed an ultra-light plane to learn their migration route making frequent stops along the route. This allowed the researchers to gather the data they needed. Researches confirmed something we already know; flying in a V is really complex in so many ways.

What We Have Learned

Here’s the simplified version:
Each time a bird flaps its wings it creates vortexes (mini whirlpools) in the air; both downdrafts and updrafts. To take advantage of the energy saving updrafts, a bird positions itself just behind and to the side of the bird in front of it. It then times its wing beats to catch the uplifting eddy perfectly. If a bird drifts behind another, it reverses the timing of the flapping to minimize the effects of the downdraft coming off the back of the front bird’s body. As the birds fly, they constantly adjust their positions and wing beats to find the aerodynamic sweet spot. This results in 20 to 30 percent energy savings for each bird and lets the flock fly up to 71 percent farther before stopping.

Scientists have not figured out everything just yet. How we sense the ever-changing sweet spot and synchronize our body motion and flapping speed to stay in it remains a mystery to the humans. They suspect that we align ourselves by sight or by sensing the current through our feathers. Another idea is that we move around to find the spot of least resistance.

The bird in front of the V expends a lot of energy, since it cannot take advantage of any updrafts, so we take turns in the lead giving each other breaks. Scientists still ponder which of us sets the course and pace for migrations, while others want to figure out if a mistake made by the leader ripples through the flock causing a “traffic jam.”

Flying in a V formation allows us to see each other more easily and get clues for when to change directions with the flock. This prevents a lot of crashes. With all those eyes flying together, we can spot predators more quickly and avoid untimely deaths.

Honk! Honk! It’s my turn to take the lead. Watch for those fly Vs this fall and wish those astonishing fliers luck on their long grueling migration south.