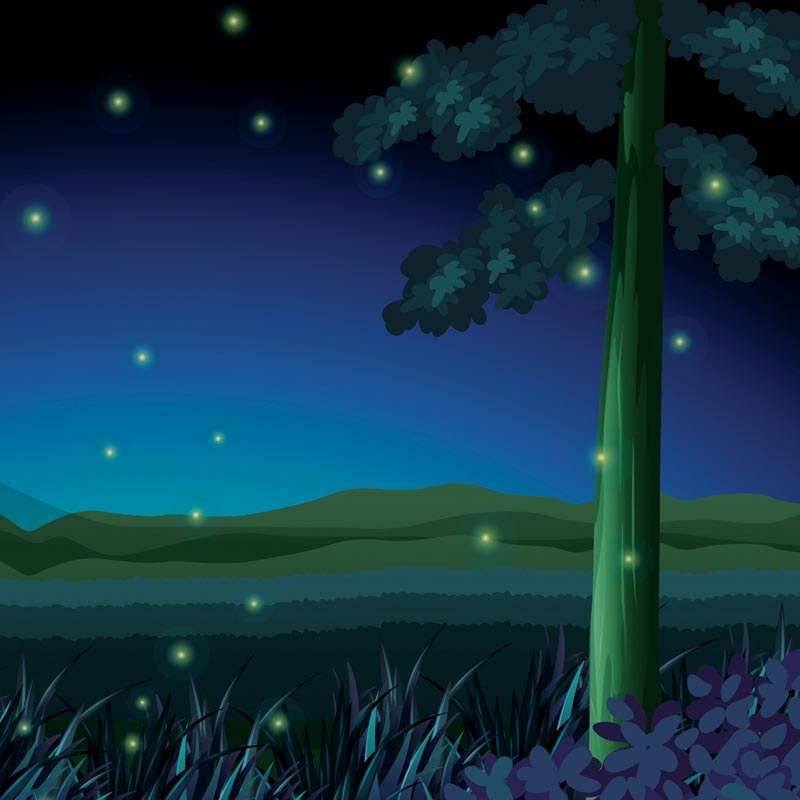 I need to get this pattern right or a female of my species won’t answer. We need to connect to mate. Boy, we fireflies sure live a tough life. In my family, Lampyridae, two thousand different kinds (species) of fireflies exist throughout the world (except in Antarctica) and, most species have their own special signals of flashes! With some species, the adults don’t flash at all; they use pheromones to find mates. Around here, the females flash from near the ground while the guys fly around looking for their special ladies.

After mating, females lay their eggs in damp or wet ground; in some species, the eggs glow, too! After about three weeks, a glow worm (larva) hatches. To see a glow worm, look for them on the ground in areas with damp soils. They may look cute but watch out! Those carnivorous youngsters eat slugs, snails, and worms! The larvae of all of our species glow. Some of those scientists think that the glow wards off potential predators, reminding them that the larvae taste bad. The same thing goes for us adults. After spending one to two years underground, the larvae go through a three-week resting (pupa) stage, something like a butterfly’s chrysalis. Next, they emerge as adults.

As adult we only live for a few days to a few weeks. Folks haven’t figured out exactly what adult fireflies eat. Some think we eat nectar and pollen or insects, while others think we don’t really eat at all. I guess that all depends on the species.

An Interesting Fact About Us

We’re really not “fireflies” or “lightning bugs”; we are beetles! Look for our evenly split cover wings with delicate flying wings underneath and chewing mouth parts. We are neither flies with only two wings, nor bugs with piercing mouths! I just wanted to set the record straight on that.

The way we produce “cold” light intrigues many researchers. Almost all human-made light bulbs give off some heat along with light. With fireflies, we make light without generating any heat. Pretty cool! We create this bioluminescence (living light) in our abdomens by mixing oxygen from the air with special organic compounds: luciferin, luciferace, and ATP. Other organisms can produce bioluminescence, but fireflies are the only living things that can flash light off and on.

Please Help! We are Decreasing in Numbers

I need to share some sad news. Fireflies are disappearing all over the world, mostly because of humans destroying our habitats and increasing light pollution. Here’s how you can help. Make your yard a firefly haven by following these tips. Turn off outside lights and shut window blinds/shades at night. Keep an area of long grasses. Plant native trees and flowers. Help protect habitats with rotting logs and plant litter located near water. Encourage adults to use natural fertilizers and less pesticides.

On a warm mid-summer night, venture out into the dark to an open grassy field. That’s where you’ll catch our light show of summer night flashes!