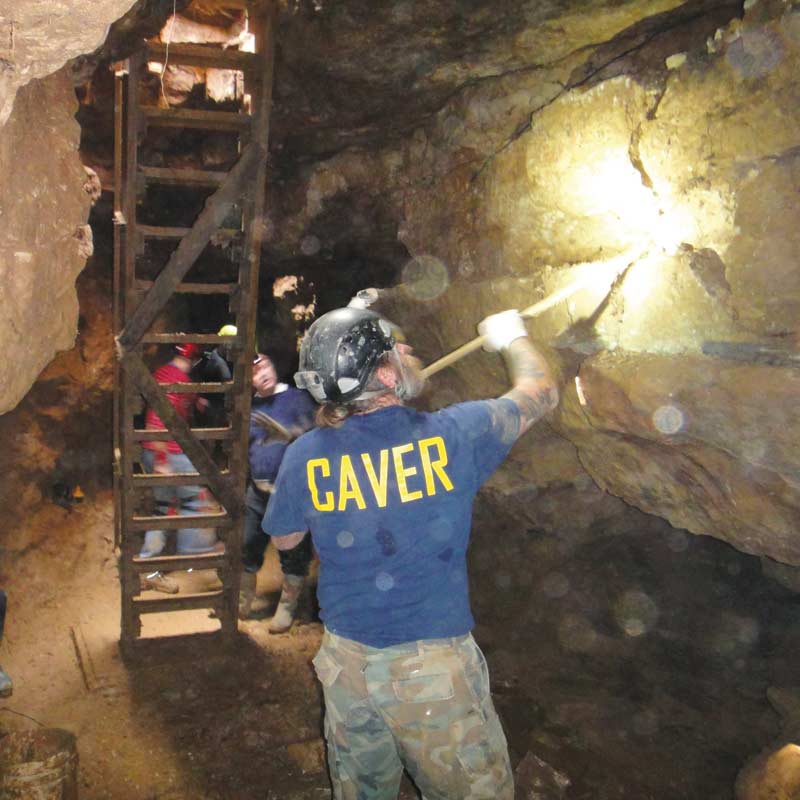 Over the past number of issues I’ve shared with you the positive benefits cave restoration has in Northeast Wisconsin.

Over the past 35 years, experienced cavers have spent countless hours in the caves developing proven techniques which best serve this precious underground natural resource. The hard work and dedication from our diverse Wisconsin Speleological Society members are pleased that your families can experience these treasures!

Unfortunately, due to White Nose Syndrome (WNS) and bats, current State and Federal regulations have caused a conflict of interest. In the past, cavers have been able to work in the caves during bat hibernation with no noticeable detriment to the bats whatsoever. However, in recent years, cavers have not been allowed in the caves for more than half of the year; late fall, winter, and early spring.

You will hear that humans have ways of transporting spores to the bats resulting in the bats spreading the disease. This has never been proven as fact in any scientific literature and is only speculation. Bats roost in the higher ceiling areas of the caves. I, personally, have never seen a bat near the floor area where human foot traffic is located. You may also hear that WNS was brought over from Europe by a human who entered a cave in New York State in 2006 where WNS was first noticed in North America. Another possibility, which many cavers believe, is that WNS was brought over by a bat, not a human, in a shipping container by the large shipping ports along the coast.

There is no doubt that WNS is transferred from bat to bat. Human to bat transfer is only speculation. When you watch the year to year interactive map to see how WNS has spread over the past 12 years it is a gradual progression from state to state. If humans were responsible for its spread, one might assume a more random pattern across every state in the nation where WNS would be identified. But this is not the case.

In the past, cavers were able to perform safety inspections and maintenance work year round – on a monthly basis. Now, much of this type of work can only be done during the summer months. In WI, some public caves have not seen this important work for many years. The State and Federal position on this is that they must be unsafe, and perhaps they should be closed. As people who love to share the parks with your families, this information may be as displeasing to you as it is to me.

Caves around the country have been closed due to WNS regulations. Studies have shown that due to these severe regulations cavers and caving grotto organizations are no longer able to protect the caves. These caves soon become vandalized. Underground museums which have taken hundreds, and even thousands, of years to form are lost entirely.

But, there is good news. In Vermont, one of the state’s first hit by WNS, studies have shown that there is some genetic resistance to the disease. Bats are slowly repopulating. It will take time, but I am hopeful and believe their numbers will return. Wisconsin bat numbers have decreased since WNS was identified here a couple years ago. Proven restoration efforts and protected increased habitat for bats equals increased numbers of bats! At this time, these facts continue to be overlooked and hindered with regulations. If there was ever a time to help the bats it would be now! And that would mean increasing the restoration efforts!